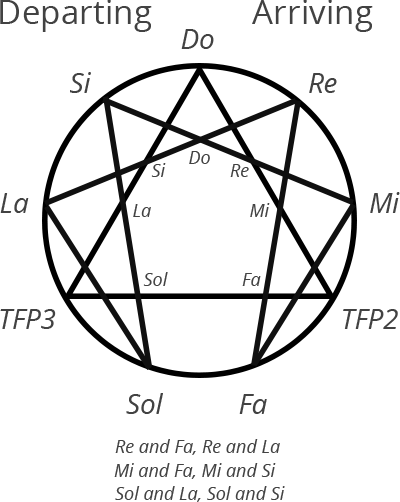 The enneagram is experiencing a popularity surge. Many people have likely come across this exotic looking symbol in connection with personality tests or the idea of nine interconnected personality types.

This modern repurposing of the enneagram may or may not have some utility but there's more to the story.

Gurdjieff introduced the world to the enneagram in the early Twentieth Century. He used the symbol as a tool to decipher the inner workings of complex processes that resist simple explanations.

Linear thinking has some definite shortcomings when it is applied to logical systems which are not linear. Most systems that might benefit from an enneagram are not well served by strictly linear considerations.

A giant, hungry tiger running toward you is fairly linear. The psychological work required to rehabilitate the attitudes of students in a Movements class is not.

The enneagrammatic model of the rehabilitation effort can incorporate causality considerations in many directions at once. It becomes a complex model that can actually serve to guide one through the vagaries of such a task.

A linear model is, by its nature, two dimensional. It is an abomination to the potential of correct human thought and to Gurdjieff’s common cosmic laws of threefoldness and sevenfoldness, the Sacred Triamazikamno and Heptaparaparshinokh!

Here are some examples of enneagrams by students in our school. Some that are of a personal nature have had the names of individuals removed.